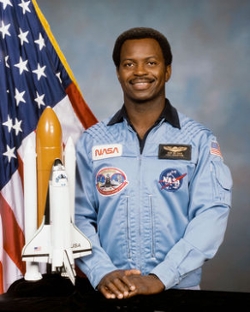 Dr. McNair's many distinctions include: Presidential Scholar (1967-71), Ford Foundation Fellow (1971-74), and National Fellowship Fund Fellow (1974-75).  He was named Omega Psi Phi Scholar of the Year (1975), was honored as the Distinguished National Scientist by the National Society of Black Professional Engineers (1979), and received the Friend of Freedom Award (1981). He was also awarded honorary doctorate degrees from the North Carolina A&T State University, Morris College and the University of South Carolina. In addition to his academic accomplishments, Dr. McNair was also a gifted athlete, sixth degree black belt in karate and saxophonist.

Ronald E. McNair was nationally recognized for his work in the field of laser physics.  In 1978, he was one of 35 applicants selected from a pool of 10,000 for NASA's space shuttle program and assigned as a mission specialist aboard the 1984 flight of the shuttle Challenger.  On his first space shuttle mission in February 1984, McNair orbited the earth 122 times aboard Challenger.  He was the second African-American to fly in space.  On the morning of January 28, 1986, McNair and his six crew members died in an explosion aboard the space shuttle Challenger.

His memory lives in each student who enters the McNair Program, and strives to receive a Ph.D.  After his death, members of Congress provided funding for the Ronald E. McNair Scholars Program dedicated to the high standard of achievement Dr. McNair displayed.  The McNair Post baccalaureate Achievement Program is a comprehensive program structured to prepare undergraduates for successful careers as graduate students, professors, and professional researchers.  The program is an educational opportunity program funded under the Higher Education Act of 1965 collectively known as TRiO Programs.  The McNair Scholars Program is funded by the U.S. Department of Education.

SIU's McNair Scholar program is part of the US Department of Education & Federal TRIO Programs.

Other Enrichment Opportunities at SIU: